The ACORN does not fall far from the Tree.... 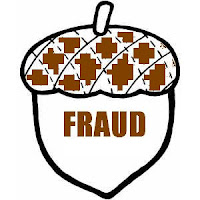 So, what's ACORN been up to these days, besides getting government grants (i.e., taxpayers' money)and supporting the political agenda of their old friend, lawyer, and current U.S. President, Barack Obama?

It appears that they have been very busy giving some very interesting advice. So busy, in fact, that ACORN has fired two employees at its Baltimore office who were seen on hidden-camera video giving advice to a man posing as a pimp and a woman pretending to be a prostitute.

According to legal experts, the ACORN staffers appeared to commit federal tax fraud by offering to help the visitors — for a fee — to establish a child brothel, encourage prostitution, and promote child trafficking for illegal purposes.
Posted by Voice of Reason at 9:09 PM